Black mothers – often considered the “backbone” in Black communities – are perceived as strong. But, this perceived strength comes from enduring many struggles in silence. One of those silent struggles involves self-care.  Despite individual differences in socioeconomics, education, and access to health care, all Black mothers face major health disparities. In fact, just becoming a mother is a potentially life-threatening event for every one of them. Black mothers have the highest rate of maternal mortality. In fact, most of it is linked to heart disease. BLACK MOTHERS ARE DYING!

On average, pregnancy mortality in the U.S. occurs at a rate of 17.2 deaths per 100,000 births. This number more than double for non-Hispanic Black women.1 In fact, maternal mortality in Black women occurs at rates comparable to women in some developing nations.2 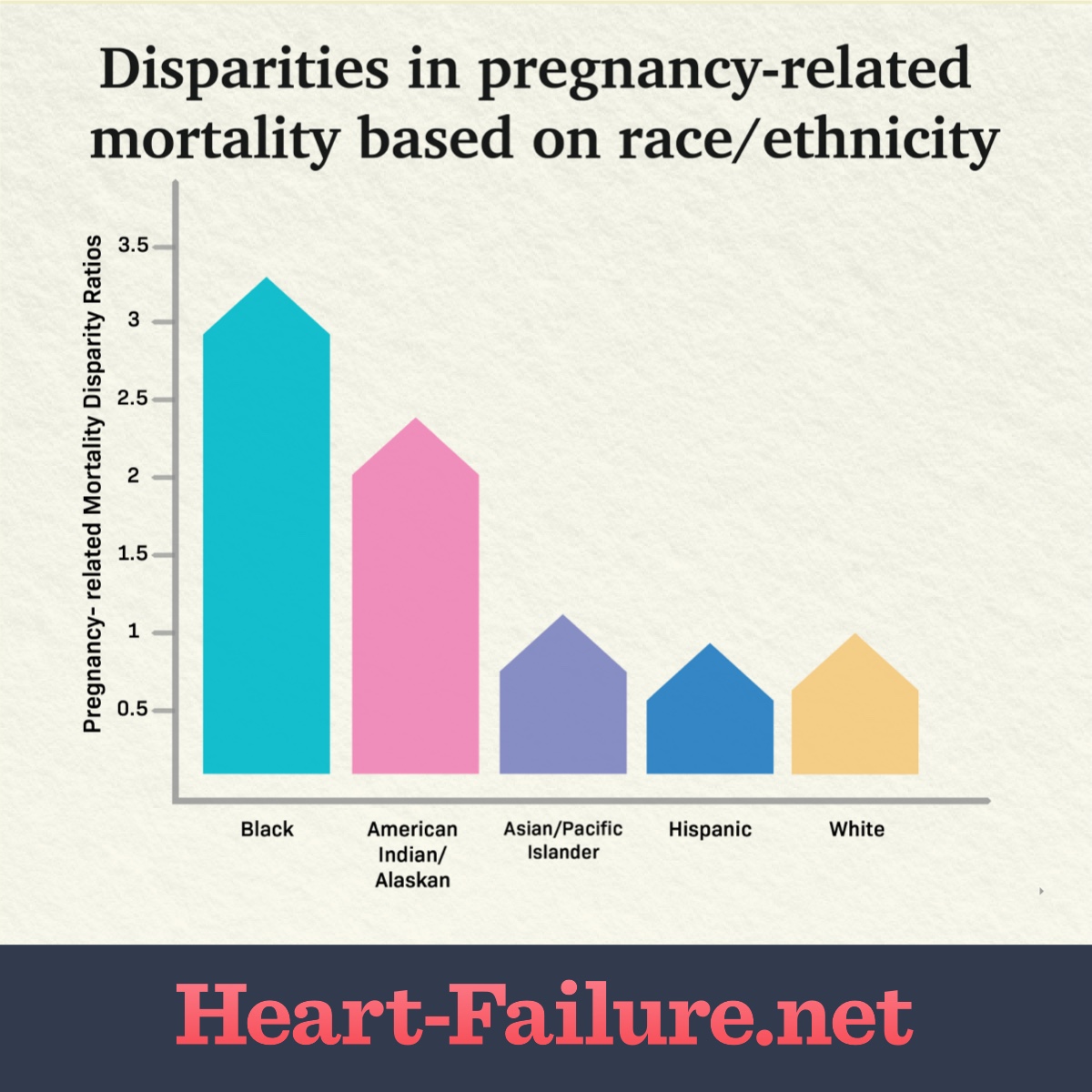 Cardiomyopathy, hypertensive disorders, and other non-cardiovascular conditions are the leading causes of pregnancy-related deaths among Black women specifically. Pregnancy-related deaths associated with cardiomyopathy, thrombolytic pulmonary or other embolisms, and hypertensive disorders are significantly higher among Black women when compared to white women (see table 2 below).3 Specifically, research shows that pre-eclampsia and eclampsia are 60 percent more common and are more severe in Black women than in white women.2

Research also revealed a higher incidence of peripartum cardiomyopathy (PPCM) in cases of severe preeclampsia. This indicates that preeclampsia and eclampsia are the strongest risk factors for the development of PPCM throughout the world.4 It also suggests that cases of PPCM worldwide go misdiagnosed – and/or undiagnosed.  BLACK MOTHERS ARE DYING! 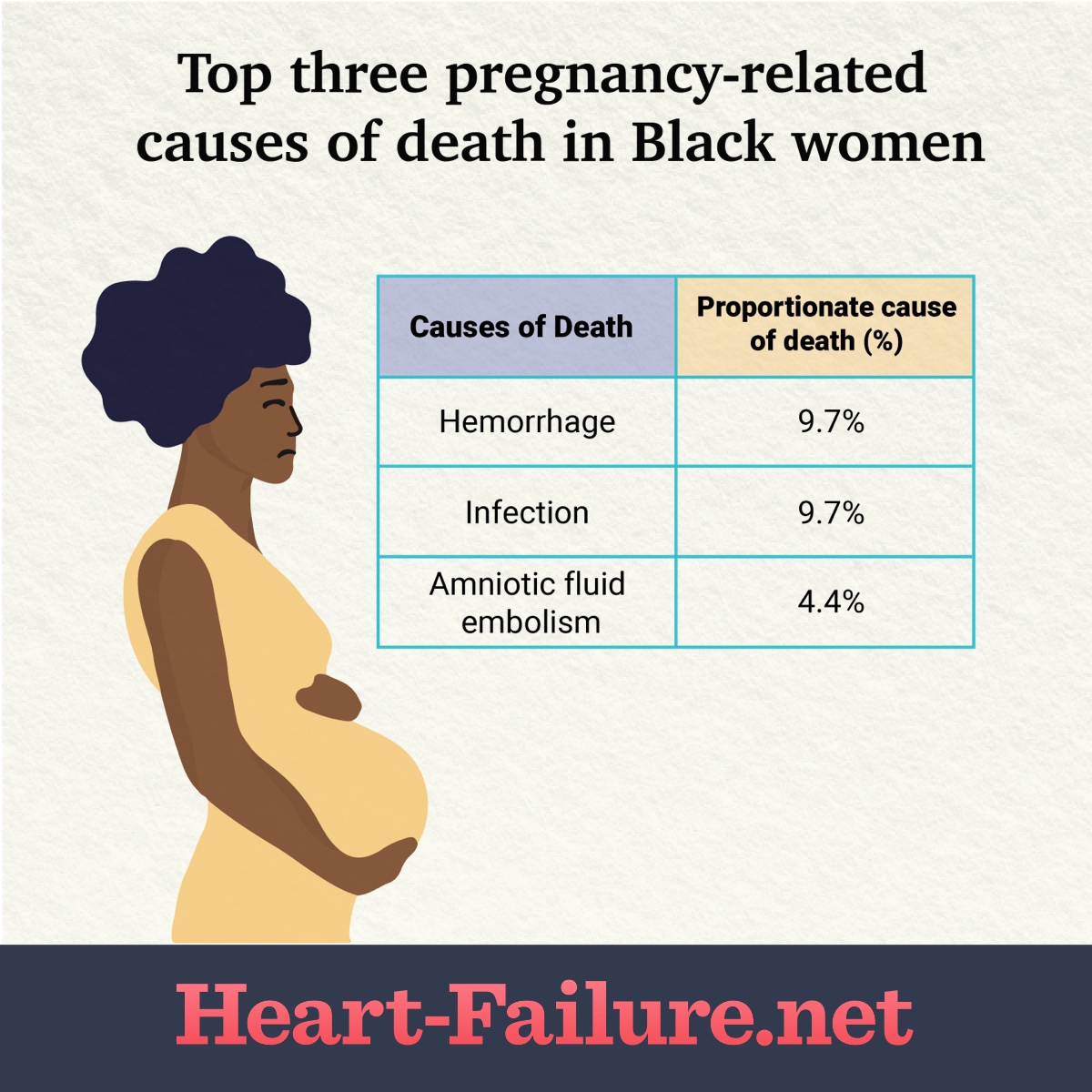 † Significantly higher proportion of pregnancy-related deaths compared with that among white women, p<0.05.

§ Significantly lower proportion of pregnancy-related deaths compared with that among white women, p<0.05.

Peripartum cardiomyopathy (PPCM) is also known as postpartum cardiomyopathy. It occurs during the last month of pregnancy or up to five months postpartum. PPCM happens to about 1,000 to 1,300 women each year in the U.S. It is rare and difficult to diagnose. The symptoms mimic those of third-trimester pregnancy, such as swelling in the feet and legs and shortness of breath.5

Despite its rarity, Black women have twice the risk for developing PPCM. They are diagnosed with PPCM at a younger age and later in the postpartum period. They are more likely to worsen after initial diagnosis, present with end-stage heart failure, and recover less frequently. Black women also take longer to recover when compared with their non–Black women despite apparently adequate treatment.6 BLACK MOTHERS ARE DYING!

There are many possible reasons for these disparities - differential access to healthy and safe living environments, decent jobs, and health insurance, differing quality of prenatal care, stress, access to reproductive health services, receipt of lower-quality health care overall, and inadequate bias training coupled with unconscious biases among health care providers.1,3,7-9 But even as researchers attempt to control for various factors like socioeconomics, education, insurance, age, and other factors, Black women still have a higher maternal mortality rate. BLACK MOTHERS ARE DYING!

A mother's right to live

In an ideal world, pregnancy would be a joyous event for families and friends. Sadly, because of health disparities in the U.S., this beautiful event can quickly become a nightmare for the expectant mother, especially if she is a Black mother.

Black mothers have to overcome several struggles that not only contribute to the development of heart disease but also can exacerbate the condition. Health disparities experienced by Black mothers can lead to heart disease, thereby leading to stress that worsens heart disease – and the cycle endures.

Let’s make a united effort to eliminate health disparities so that we can improve the rates of maternal mortality for not just Black mothers, but for EVERY mother.

Life After Recovery: Learning to LIVE All Over Again

Coronary Artery Disease, Part I: We Have a Problem

Do you know someone living with kidney cancer?